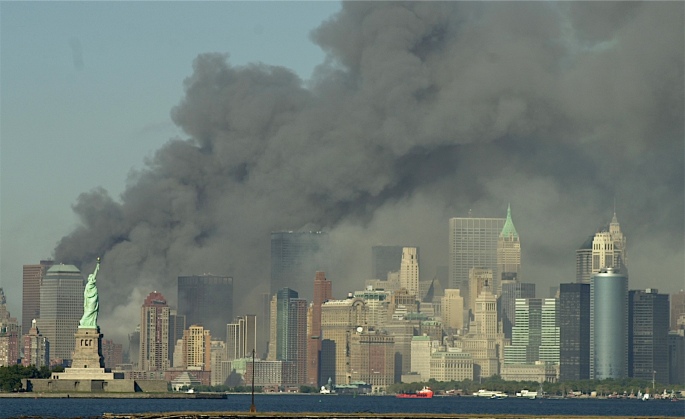 It has been six years since Islamic terrorist hijackers flew two commercial jetliners into the World Trade Center towers in New York City, and another into The Pentagon.  They were thwarted by heroic passengers in their attempt to fly a fourth jetliner into the U.S. Capital Dome.  We must never forget that day.  We must never be deterred in seeking justice, I, for one, will never forgive.  But, that’s not the point of this article.

The day after those inexcusable attacks, I placed an ad in the Winfield Courier urging investors to maintain their poise and to keep faith with the future.  In that ad, I quoted Thomas Paine, the voice of The American Revolution:

These are the times that try men’s souls:  The summer soldier and the sunshine patriot will, in this crisis, shrink from the service of his country; but he that stands it NOW, deserves the love and thanks of man and woman.

Panic is not a strategy, and pig-headed persistence in the face of difficulty is a virtue.

In the intervening six years, our nation has made deliberate, if excruciatingly slow, progress in the effort to defeat Al-Qaeda and related Islamic terror organizations.  In that effort, I am merely a spectator with a powerful vested interest in the outcome.  My real passion, though, and what I am compensated for—by you and people like you—is helping people achieve progressively greater goals over the entire course of their lifetimes.  I am very proud to say that in the aftermath of 9/11, our clients did not shrink from their goals or undermine their own strategic interests.  Like Washington’s army, they continued to march steadfastly in the direction of their dreams.

What has been the reward for their faith in the future?

America’s economy is still the world’s strongest and most resilient.  American markets are still the deepest, best capitalized, and most transparent in the world.  Since September 11, 2001, real (inflation adjusted) Gross Domestic Product (GDP) has risen by more than 16%—$1.65 trillion.  American business has produced twenty-three consecutive quarters of economic growth.  As Larry Kudlow recently pointed out, the U.S. economy has added the equivalent GDP of five Saudi Arabias, eight Irans, thirteen Pakistans, or fifteen Egypts.

Real (inflation-adjusted) annual after-tax income is up more than $2400 per person, the national unemployment rate has fallen from 5.7% to 4.6%, and at last check, continues to fall in thirty-two of the fifty states.  Housing construction—as who could not know—has fallen on hard times, but the median price of an existing home in America is still 45% higher than it was six years ago.

By your sponsorship of those evil acts six years ago, you tried to bring the American economy to its knees, and to destroy our way of life.  You failed.

Since 9/11, total after-tax profits in the United States are up 104%.  The Dow Jones Industrial Average is up 39%, the S&P 500 Index is up 33%, and the Nasdaq Composite Index is up 51%.  The Freedom Tower is rising to celebrate the benevolent and resourceful spirit of America.  America:  The land of the free and the home of the brave, and the engine of the Global Capitalist Revolution.  We take pride in knowing that success is the best revenge—you cold, cringing, degenerate bastard!

Have all of our challenges disappeared?

No, of course not!  The war on terror grinds on.  The credit markets are re-pricing risk, correcting a too loose monetary policy by the Federal Reserve.  Oil prices have skyrocketed.  Politicians still do stupid thins and then lie.  It is certain that tomorrow, we will be confronted with new and unexpected challenges.  But, come what may, let us not be summer soldiers in the service of our dreams.  Let us not change who we are in the land of the free and the home of the brave.  We are proud Americans

Not FDIC insured. No bank guarantee. Not a deposit. May lose value. Not insured by any government agency.

The opinions expressed in this blog are for general information only and are not intended to provide specific advice or recommendations for any individual. To determine the investment(s) that may be appropriate for you, consult your financial advisor prior to investing. All performance referenced is historical and is no guarantee of future results. This information is not intended to be a substitute for specific individualized tax advice. We suggest that you discuss your specific tax issues with a qualified tax advisor.

All indices are unmanaged and cannot be invested into directly. The LPL Financial registered representative associated with this site may only discuss and/or transact securities business with residents of the following states: AZ, CA, CO, FL, KS, KY, MD, MO, NC, NE, OH, OK, PA, TX.